Last night, CloudFlare announced that they had an extremely small percentage of requests that could result in leaked information from previous requests being included by mistake. Furry Network uses CloudFlare to help protect against distributed denial of service attacks.

CloudFlare has since resolved the issue that was leaking information, and they have contacted staff to let us know that no Furry Network users were affected according to their knowledge. However, as a precautionary measure, we have logged all users out of the website. We also request that you change your password.

CloudFlare’s announcement can be found here.

A list of potentially affected sites can be found here.

We thank you for your patience with this matter.

We’ve been working with our developers to roll out our next update, and it has now gone live! This update involves reindexing submissions, and this process will likely continue through most of Friday. Parts of users’ galleries may not be visible during this process, so if it looks like you have a few submissions missing, don’t worry – those will show up soon.

Here are the updates for the site. 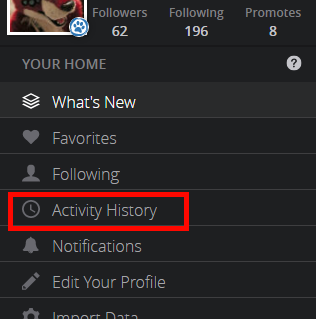 The feed has been changed to have a visual element. Now, published artwork appears large on the feed, and any promotions or comments have a smaller icon on the feed item. This way, you can get a quick glance at the submission and see if this is an artist that may interest you.

As a quick note, favorites still do not appear in the Activity History – these remain private to you. If there is something stellar that you want your followers to see, though, hit promote! Sorting By Most Popular

We corrected this issue, and the sorts now work correctly. The popular feeds now react in real time to the activity on the site, updating as submissions are viewed, receive comments, and are favorited or promoted. We want our users to find some of the most outstanding content on the site, and this will make discovering fantastic creations much easier.

These site changes have come in preparation for commission testing. Originally, we had planned to begin testing at the end of January or the beginning of February, but we wanted to make sure the rest of the website was functioning well. We are still aiming to begin testing before February is over.

We are also working on a text editor for the site. At the moment, the tools to format stories and journals on Furry Network are nonexistent. Our developers have put together tools that will allow easier formatting, and this is expected to be implemented in the next site update.

We appreciate your enthusiasm, and we hope these changes will help you find and share content that you absolutely love!

As we are moving closer to testing the Furry Network Commission Tool, we have worked to clarify policies and add documentation about how information gathered on the site is used.

We have added guidelines in our Acceptable Upload Policy for game and program screenshots. These will be considered artwork and should include content that has been created by the user. Made a detailed red panda model on Second Life? Show it off! Modded a Khajiit to have Nigel Thornberry’s nose? A little odd, but sure, upload it!

Screenshots of things that were already in programs or games won’t be permitted. Yes, we know that black chocobo in Final Fantasy XV is adorable, but screenshots wouldn’t be allowed since they would not contain user-created content.

If for some reason information does need to be used in another way, the policy will be revised, and we will post an update outlining that change.

The development team is currently working on an update for Furry Network. We will roll out several bug fixes, but the biggest change will be with sorting by popularity. Currently, sorting by popularity always shows the same images; this will be fixed to show submissions with the most activity. You will be able to sort by weekly, monthly, or lifetime popularity. We want your outstanding art to be seen by the community, and this will help veterans and newcomers alike to get their work out in the open.

Shortly after we have rolled out the site update, we will begin testing the commission tool. For now, sellers are being hand-picked to test, but any Furry Network users will be able to purchase commissions. We still have a few slots open for sellers, so if you are interested in helping test the commission tool, feel free to fill out our volunteer application.

We appreciate the talent and the warm-hearted nature of this community!